Looking for the best Brazilian spices to flavor your food? This is the whole list of herbs and seasonings + a Tempero Baiano recipe

Brazil is a mix of cultures, religions, and races which makes for one of the most diverse cuisines in the world.

Brazilian food is heavily seasoned with spices like cumin, coriander, and chili pepper to give it its unique flavor profile.

If you’re looking to spice up your culinary repertoire with some new flavors, then add some Brazilian spices to your pantry!

They can be found whole or ground. Used as seasoning for meats and vegetable dishes, especially rice.

Bay leaf is used in Brazilian food like beans and feijoada during their cooking process, giving them a better flavor.

It is the ground seeds of an annual herb of the parsley family, used as seasoning for meats and vegetables.

Cumin is one of the most widely used spices in Brazilian cooking. It has a slightly bitter taste but imparts an earthy flavor to food. This spice enhances almost every meat dish you can think of, especially feijoada and beef stews.

It is an annual herb from the parsley family, known as cilantro in North America. It has a sweet taste with a distinct odor. In Brazilian food it’s used in beans, salads, breads and fish dishes.

In Brazil we use it to season dried meat called Carne do Sol, and breads.

Cilantro is the most common ingredient in Brazilian cooking. It has a greenish color and its leaves don’t have any odor but give food a delicate and distinctive taste. This herb is used with vegetables salads, beans, rice and stews.

It’s made of dehydrated garlic ground into a powder. It’s used mainly to season fish, meats, vegetables and beans.

It has the same properties of fresh garlic but without the pungent taste that can stay on your breath after you eat it.

It’s made of strips of the dried flower buds of the tropical evergreen clove tree. It has a sweet taste with woodsy, peppery overtones. It’s used in meats, sauces and desserts.

Cloves are sometimes used whole for pickling or to stud meat.

It is a plant with yellow flowers which gives its name to this spice. It’s used in Brazilian food like rice, bean dishes and stews.

Turmeric is known for its medicinal properties and in Brazil it’s mostly added in stuffings or in the preparation of smoked meat (Carne de Sol).

In Brazil we use it with dishes that have lemon or vinegar flavors, just like vinaigrette salads or rice.

It’s a perennial plant of the mint family used to season various foods such as meats, vegetables, beans, fish and soups.

It has a strong flavor which is why Brazilians use it mainly to season dried meat or for feijoada. Also used in sprinkling on meats, rice, beans, salads and sandwiches.

It is a spice made from dried and ground pods of various kinds of bell peppers. It has a bright red color and a pungent taste. In Brazilian food it’s used with rice, vegetables, meats and soups.

In the northeastern region of Brazil where most people have African roots paprika is uses as seasoning for black bean stew.

It is the bark of several trees from the genus Cinnamomum. It has a sweet taste with woodsy, citrus undertones. In Brazilian food it’s used mainly in desserts and breads, but it can be used to season fish or poultry.

Cinnamon is one of the most popular Fall spices used in the world and definitely one of the easiest to find in supermarkets.

Anatto is one of the coolest Brazilian spices you’ll try. It’s a seed obtained from the tree of the same name which is native to tropical America. The powder has an orange color with a very distinct flavor so it’s used sparingly in many Brazilian foods, especially rice, vegetables and fish.

It is a flavorful, almost sweet herb used raw to flavor salads and cooked with meats.

In Brazil we use it to season feijoada, beans and rice dishes.

They are from a perennial herb native to southern Europe and north Africa. The taste is fresh with a hint of anise.

In Brazilian food the seeds are used mainly in sweet dishes and desserts.

It is made from the oil of the seeds of Dende palm fruit. It has a heavy, buttery overtones and is used in Brazilian food with fish dishes.

Brazilians use this oil to make acarajé, a type of bean fritters that’s a traditional delicacy in Bahia.

There are many types of chili peppers, but the two most common in Brazilian food are the cayenne and the jalapeño.

Cayenne is normally red or green with a spicy taste used to season food. It’s very good for meats and fish dishes.

Jalapeño has a sweet taste with medium heat.

This is a spicy mix used in Brazilian food to season rice, beans, meat and fish.

Brazilians use this mix to flavor acarajé, vatapá and grilled meats.

Tempero baiano is a spice that got started in Bahia a famous Brazil zone.

What you need to make tempero baiano 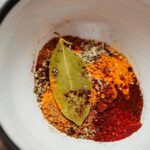